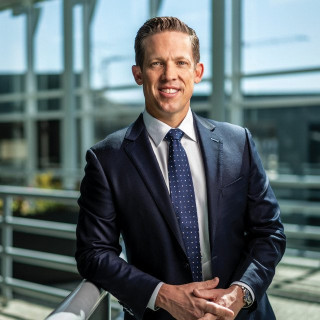 Jonathan Dennis was born and raised in Los Angeles, California (Oakwood HS in North Hollywood). Mr. Dennis obtained a Bachelor of Science degree in Business Finance from the University of Southern California in 1999. In 2006, Mr. Dennis obtained his Juris Doctorate degree from Loyola Law School, Los Angeles. Mr. Dennis was admitted to the State of California Bar in 2007. Mr. Dennis also has been admitted to practice law before the United States District Court for the Central District California. Mr. Dennis’ practice emphasizes both prosecuting and defending a wide range of federal and state civil litigation matters, including catastrophic injury claims, product liability cases, complex internet and business litigation, employment/labor law and class actions. From 2012 - 2016, Mr. Dennis was named as a "Southern California Rising Star" and was featured in Los Angeles magazine and Super Lawyers magazine as one of the premier lawyers in Southern California under the age of 40. Mr. Dennis has served on the Beverly Hills Bar Association Barristers Board of Governors since 2008. In 2011, he was elected to the executive committee as the Barrister's treasurer and served in that capacity until 2014. From 2014-2015 Mr. Dennis was the Chairman of the Beverly Hills Bar Association's Personal Injury section. Mr. Dennis is also a member of the Los Angeles County Bar Association and Orange County Bar Association. Prior to founding Dennis Law Group, Mr. Dennis was an associate at Rosen Saba, LLP, and Murchison & Cumming, where he practiced in the general liability, domestic and international product liability and business litigation groups. Before taking up the law, Mr. Dennis was a founding partner in a Chicago-based advertising firm, which focused its business on digital media, assisting clients breaking through traditional brick and mortar models, expanding their online presence and increasing bottom line revenues through new and creative digital-based business mo

Q. I was in an accident about a month ago (hit by a car as I crossed the street from sidewalk to sidewalk while biking home
September 17, 2020
A: I highly recommend you consult with an attorney. You may be entitled to recover not only the cost you incurred, but compensation for your (past?) and future medical expenses, as well as your pain and suffering. Based on your description, it sounds like you suffered a traumatic brain injury which can have long term consequences.

Q. Does the TOLLING OF CALIFORNIA'S STATUTE OF LIMITATIONS apply in my situation?
September 10, 2020
A: A defamation (libel and/or slander) lawsuit must be filed within one year after the defendant first communicated each defamatory statement to a person other than the plaintiff. See California Code of Civil Procedure § 340(c). There are exceptions, but not because a Defendant is out of state. Please note, because of COVID, California Courts issued Emergency Rules and have extended the SOL. Please see emergency rule 9. https://www.courts.ca.gov/documents/appendix-i.pdf

Q. Is it true that I might not be able to get my medical bills paid if I misused a defective power tool that injures me?
February 19, 2019
A: Generally speaking, misuse is a complete defense to a claim for strict product liability so long as the misuse was not foreseeable by the manufacturer. That said, I suggest speaking with an attorney that practices Product Liability since the facts of your particular injury may lead to liability against the manufacture and those that placed the product into the stream of commerce.