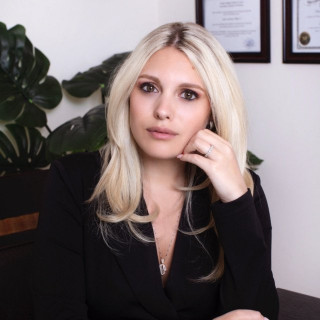 Monica Balyasny is a licensed attorney in the States of Florida and New York. She is fluent in both English and Russian.

Mrs. Balyasny graduated from John Jay College with a Bachelors in Science in Criminal Justice in 2012. After graduation, she moved to South Florida to attend Nova Southeastern University, Shepard Broad College of Law, where she obtained her Juris Doctor in 2018. While in law school, Mrs. Balyasny received her concentration in Health Law while actively participating in extracurricular activities at Nova. She was a representative for the Jewish Law Society Association and a member of the “Pulse” Health Law Society. When she was not participating in school extracurriculars, Mrs. Balyasny was actively involved in her community as a member of the Jewish National Fund and the Jewish Federation.

Throughout law school, Mrs. Balyasny gained experience in several different fields of law including immigration and criminal defense. She excelled in legal research and writing, composing complex briefs and motions among other written memoranda. Upon graduating early from Nova, Mrs. Balyasny began drafting legal documents for several law firms for both State and Federal Court cases.

Florida
The Florida Bar
Since 2019

Why You Might Need an Immigration Attorney
Kivo Daily
April 28, 2021