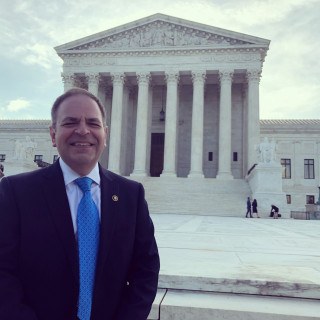 Theodore Alatsas, Esq. was born the child of Greek immigrants in the early 1970s. Growing up in Sheepshead Bay, Brooklyn, Theodore learned the importance of hard work and dedication to his community at an early age. As an exemplary student and community activist, Theodore often volunteered his time to help those who needed it. Theodore attended Brooklyn Technical High School, New York University and St. John’ s University School of Law. During his early 20s, Theodore worked his way through college and law school, while at the same time actively participating and leading various civic organizations.


Among these organizations are the Avenue U Merchants’ Association, Citizens for Neighborhood Action, Change NY, and the Joint Council of Kings County Boards of Trade. Theodore’s community involvement was recognized in New York Newsday, the Bay News and various other community papers. After graduating law school, Theodore began the practice of law in the same location where his parents owned a Greek deli. Over the years, his areas of practice have become more specialized, focusing primarily on the practice of divorce & family law. His knowledge and experience as a neighborhood practitioner, has uniquely qualified him to handle a matter not only from a legal perspective, but with a compassion designed to guide the client through the process as smoothly and as stress-free as possible.


In 2020, Theodore co-authored the New York edition of "Medicaid Secrets: How to Protect Your Family's Assets from Devastating Nursing Home Costs", with Gabriel Heiser.


Theodore's efforts have earned him a Top 10 for Family Law and for Elder Law with Attorney and Practice Magazine for both 2019 and 2020, recognition and membership in Lawyers of Distinction, a Top 10 for client satisfaction by American Institute of Family Lawyers, and an Elite Lawyers Top 10 for Family Law for 2020. He has earned the respect and admirations of his clients and peers, resulting in dozens of five st

How long does the divorce process take?

Theodore Alatsas, Esq. describes how long the divorce process can take. For more information, call the Alatsas Law Firm at (718)233-2903 or visit us on the web at www.AlatsasLawFirm.com....

What is long term care planning?

Theodore Alatsas, Esq. describes long term care planning, why you need it, and how to get it done. For more information, call the Alatsas Law Firm at (718)233-2903 or...

Who gets the house in a divorce?

What happens to the house in a divorce? What factors does the Court consider? Will it be more likely that the custodial parent will get the house? ...

Will a divorce affect my immigration status?

Recent changes in immigration laws have given rise to a greater number of questions about the impact of a divorce on an immigrant's status. Theodore Alatsas, Esq. answers some...

What is the difference between estate planning and a will?

Theodore Alatsas, Esq. answers some questions about the differences between an estate plan and a will. Should you choose one over the other? How is an estate plan...

Q. I’m thinking about filing for divorce we have a coop but I’m not on the deed but it was purchase during the marriage
February 8, 2022
A: The Domestic Relations Law essentially says that anything acquired during the marriage is considered marital property, regardless of whose name the title is in, and makes that property subject to equitable distribution (this is how property is divided in a divorce). If you were to move, it would not necessarily preclude you from getting your fair share.

Q. Good evening, I was wondering if it would be easier to file for an uncontested lawyer(k, We know what we want already.
December 3, 2021
A: Filing for an uncontested divorce can be a low cost alternative to a long drawn out divorce. When our firm handles an uncontested divorce, we require that all issues between the parties have been resolved. This includes the payment of child support, custody and visitation, and the division of any real or personal property. It requires the cooperation of both parties to be completed. If you are interested in assistance in this regard, you are welcome to contact our firm.

Q. I’m on the verge of divorce
May 19, 2021
A: You should definitely file some form of order to show cause, either in Family Court or in a divorce proceeding. You should absolutely consult with an experienced divorce attorney.